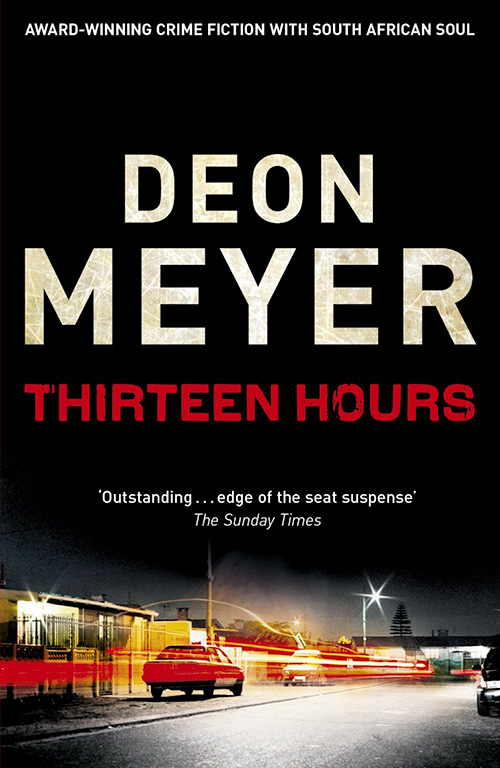 She is young, beautiful, American. And terrified. Because she is being hunted, like an animal.

At 05:37, the call wakes Detective Inspector Benny Griessel. There’s been a murder. A girl, her throat slit, her body lying next to St. Martini, the Lutheran Church in Long Street.

At 07:02, the hung-over, alcoholic former singing sensation Alexa Barnard discovers her philandering music mogul husband’s body next to her on the floor – and a pistol just inches from her hand.

By nine o’clock, with two murders to solve and his own longing for the bottle almost unbearable, Griessel realises his mentorship of a new generation of law enforcers is going to be a little more complicated than he anticipated.

Past noon, the race to save a young tourist from death becomes desperate and chaotic, and just before half past five, they shoot Griessel, right in the heart.

“Thirteen Hours has breathtaking suspense, psychological understanding, and one of the most inspiring detectives ever. Deon Meyer deserves his international reputation.”

“What makes Deon Meyer’s novel so outstanding is its setting—the new South Africa, where jaded white detectives are still getting used to working with black and colored (in the country’s parlance) colleagues . . . Meyer gives rare insights into the texture of everyday life in a country still troubled twenty years after the release of Nelson Mandela.”

“A gem of a protagonist ” [a] wonderfully realized book . . . Deon Meyer continues to be one of the most under-appreciated writers in the genre, especially in the U.S., but if he keeps turning out books like Thirteen Hours, I can’t see that situation continuing for long. This is my favorite novel of the year so far.”

“Deon Meyer is one of the unsung masters. Thirteen Hours proves he should be on everyone’s reading list. This book is great!”

“A smashing story. Imposing a strict time limit and a tight location on his plot, [Meyer] ramps up the suspense to an unbearable degree. Best of all, his sharply drawn characters really feel part of the new South Africa, where loyalties and beliefs must always be questioned.”

“There have been other South African crime novelists, but none are as deft at place as Deon Meyer. Thirteen Hours is Cape Town today, with all its exquisite beauty, tribal conflicts, loyalties and corruptions ... Meyer weaves all this into a tightly plotted story—with a twist that works beautifully—and unforgettable characters.”

“South Africa‘s Deon Meyer has a glowing international reputation, based on a series of crime novels that convey the extremes of his country in the post-apartheid era. Meyer is a journalist, writes in Afrikaans and has a brilliant translator in K. L. Seegers, who seamlessly reproduces South African slang . . . Meyer’s latest novel Thirteen Hours, has an American tourist running for her life after her friend is murdered in Cape Town. It’s a gripping plot that might have worked in almost any big city, but Meyer’s detective Benny Griessel, has to deal with tensions in a police force that still seems to struggle with black and coloured police officers.”

—Joan Smith, The Times (UK), “Best in the World of New Crime Fiction”.

“Try picking up Thirteen Hours and setting it down. Try. You can’t do it. I’m a pro, and I couldn’t do it.”

—Don Winslow, author of The Power of the Dog and Savages.

The World of Thirteen Hours 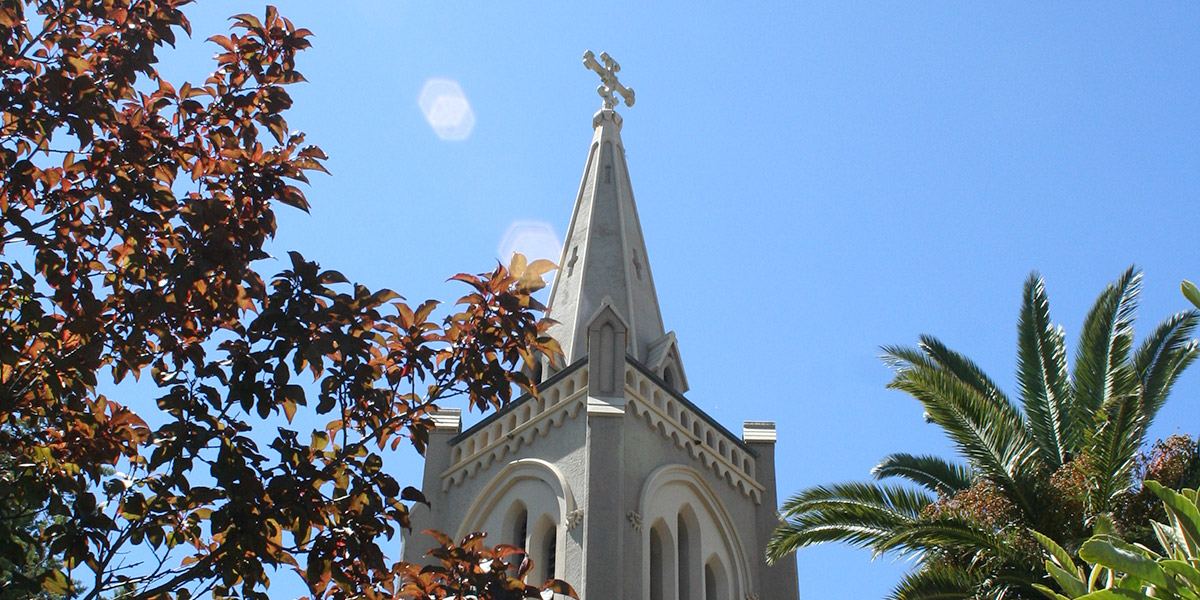 City steeple: At the top end of Long Street in downtown Cape Town is the St. Martini Kirche, a Lutheran church. This is where Benny Griessel is called at 05:37 in the morning, the beginning of 13 long hours. 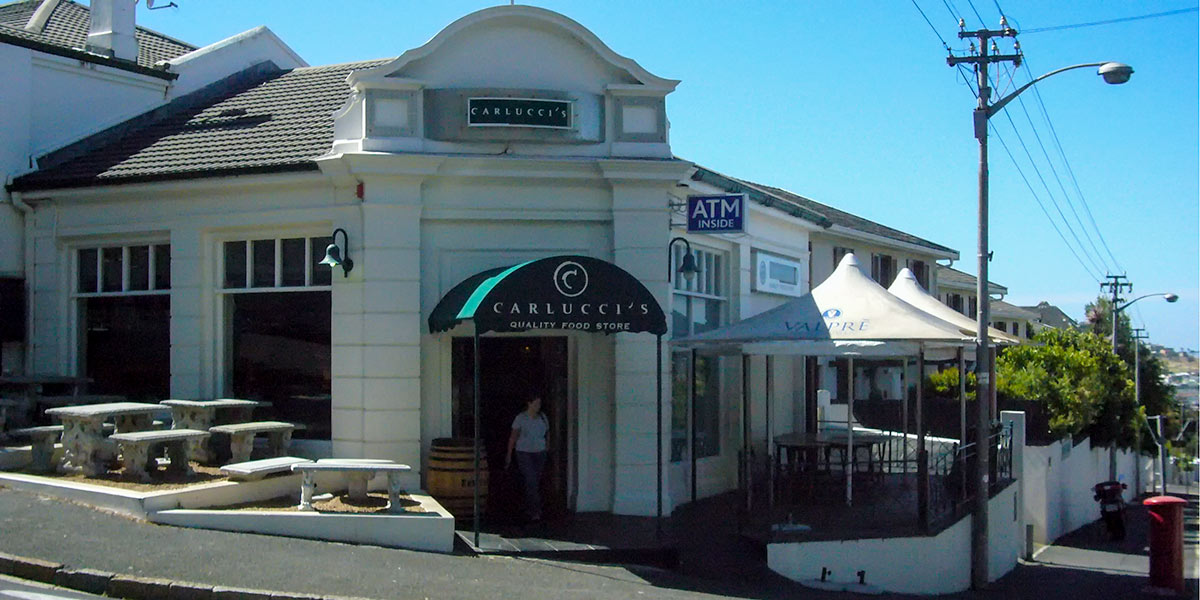 Dangerous Deli: Carlucci's, as the restaurant and deli in Montrose Street, Gardens, was called when Deon wrote the novel. The photograph is looking down Upper Orange Street, towards downtown Cape Town, the direction in which Rachel flees.

Body of Evidence:: The Lutheran church yard where the body of a young backpacking tourist is found right next to the big tree on the left. 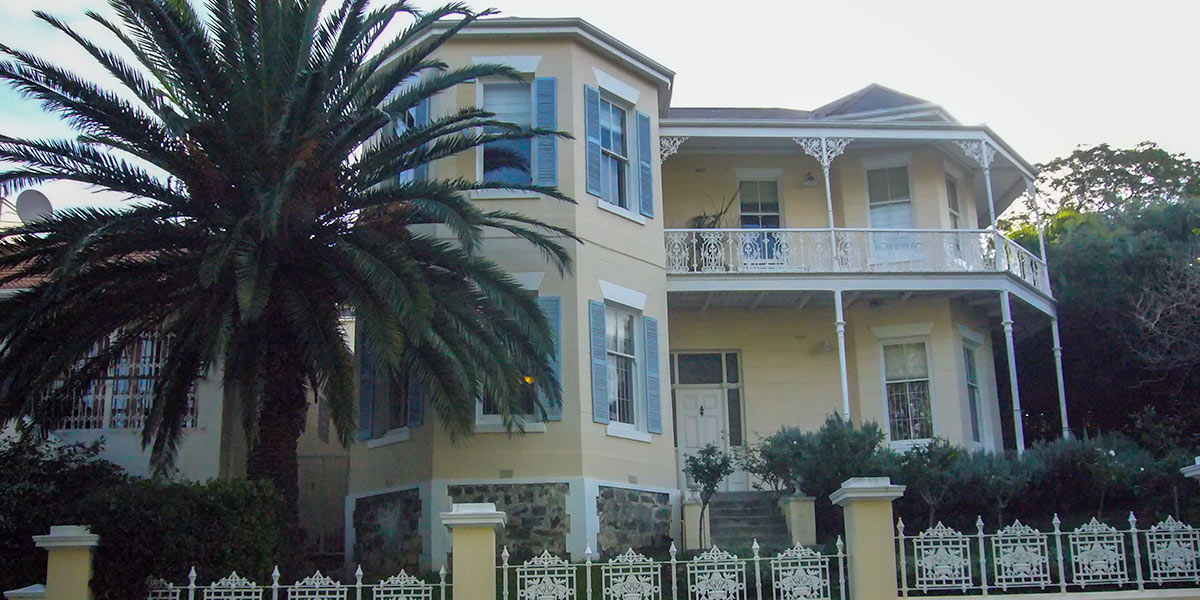 Rude Awakening: The house in Brownlow Street, Cape Town, on which the residence of Xandra Barnard is modelled. A former acclaimed singer, she wakes up to find the body of her husband on the floor next to her. 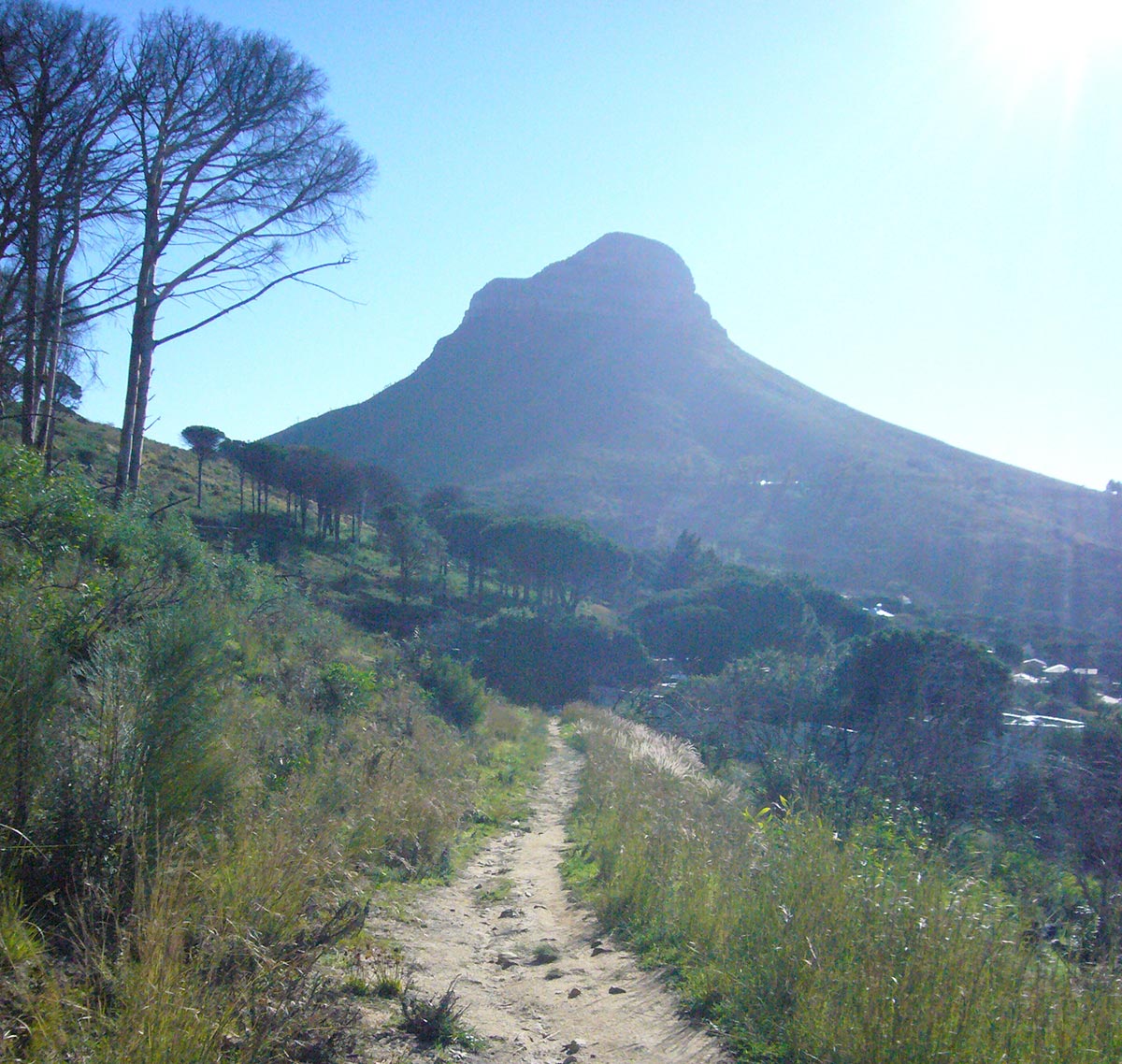 Table Mountain Track: This is the foot path along which Rachel Anderson flees. Lion's Head is in the background. 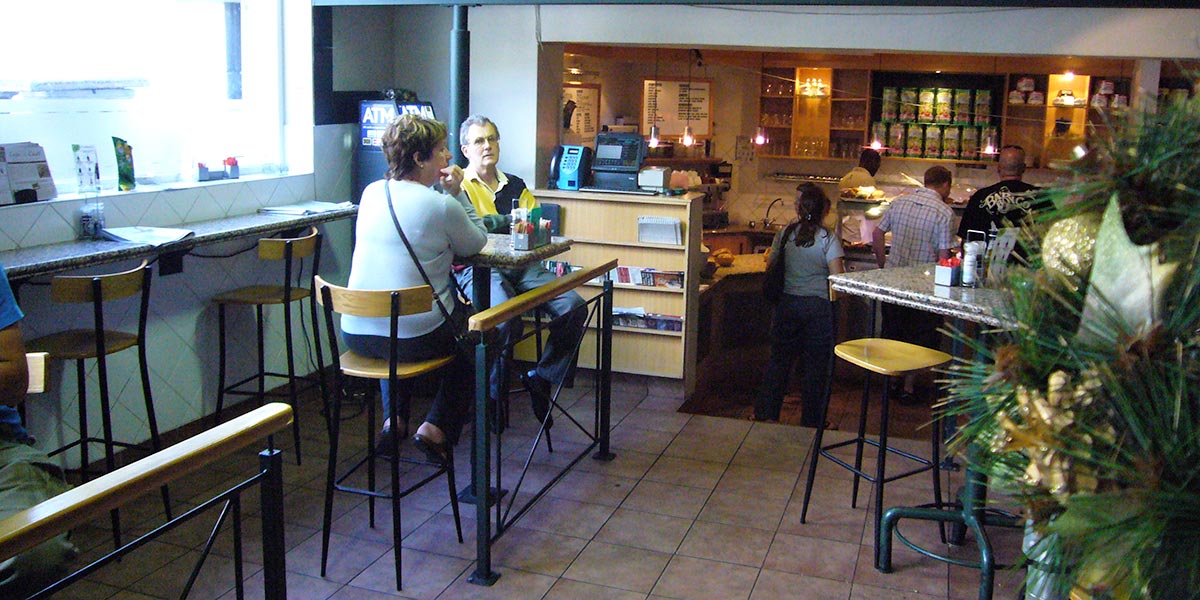 Phoning home: The pay telephone in the deli where Rachel calls home can be seen right behind the guy sitting at the table. 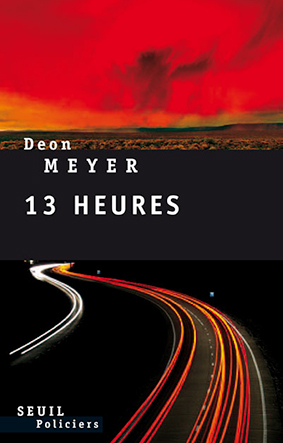 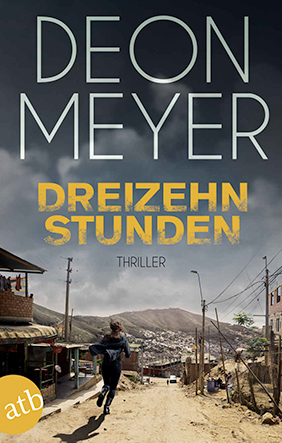 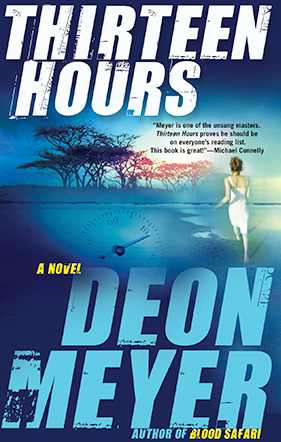 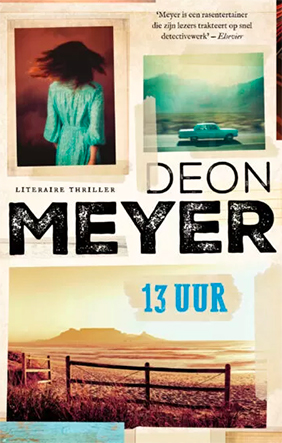 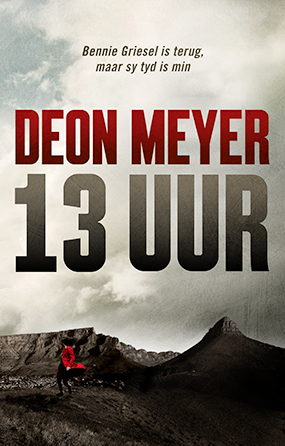